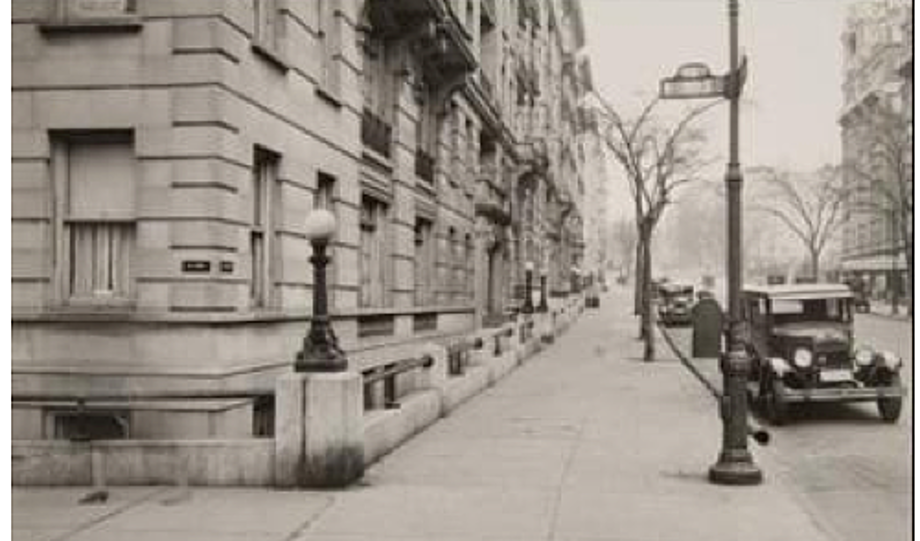 History of the Pinehurst 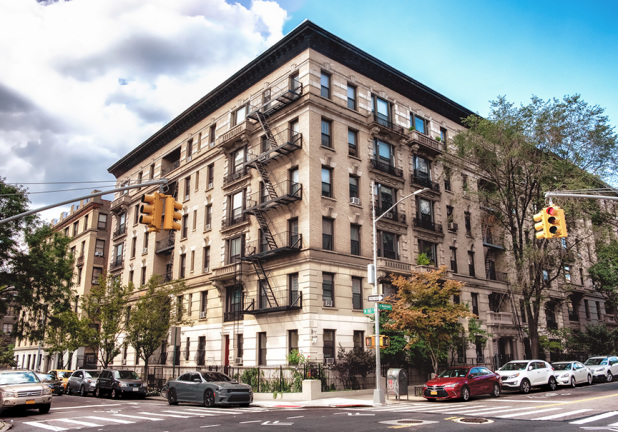 The east and south facades of The Pinehurst in summer 2020. (Photo by Ariel Ruff)
The Pinehurst was built in the same year that New York City taxis first started using meters. It was 1907, and you could hail a taxi at the brand-new Plaza Hotel, which opened its doors that year, and ask the hack to take you to the Metropolitan Opera (then located on Broadway between 39th & 40th Streets), where Gustav Mahler was conducting. 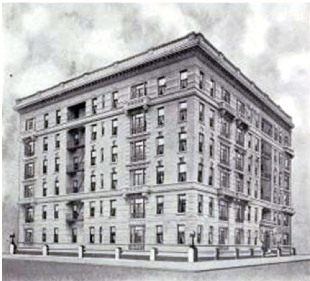 The Pinehurst in 1908. the year the first residents moved in.
Further uptown, someone walking out our front door could stroll a half-mile south on Fort Washington Avenue to Hilltop Park to watch a baseball game played by the New York Highlanders—who later became the Yankees. It was the year when The New York Times began a New Year’s Eve tradition of dropping an illuminated ball from its headquarters to mark midnight. Nineteen hundred seven was also the year that workmen began constructing our building, part of a neighborhood change that The Times referred to as “systematic development.”

In 1908 the Pinehurst welcomed its first tenants. Monthly rent cost from $38 to $100 (adjusted for inflation, that’s a monthly rent of $1,186 to $3,121 in 2021). The first residents enjoyed parquet floors, many of which remain today, oak-panelled dining rooms, and dumbwaiters, so their purchases could be delivered directly into their homes. Gas lights illuminated their apartments and the halls, and apartments facing south and west had views of the Hudson River. 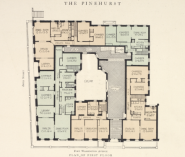 Pelham's original floorplan included five apartments per floor. (Click the photo for a larger version.)
The architect George F. Pelham designed the building. He later designed our neighbor, Hudson View Gardens (1925); his son, George F. Pelham, Jr., designed Castle Village (1938).
The building’s name seems to have come from the residence owned by C. P. Bucking on land nearby, which he named Pinehurst. Although the house was bulldozed, Pinehurst also survives on neighboring streets, Pinehurst Avenue and South Pinehurst Avenue.

The earliest known advertisement for the building, from 1908, indicates that the Pinehurst Realty Company managed the property, as well as its northern neighbor, the Chislehurst, which has a similar façade but an entirely different floor plan.

Buttons in the basement directed dumbwaiters for deliveries.
Most of the apartments had a maid’s room where domestic staff could spend the night. Quarters for guests were important because subway service did not exist on Fort Washington Avenue at the time. The Independent line wouldn’t begin running the A train for another 24 years, but trolleys ran east and west on 181st Street.

For heat and hot water, the building’s porters shoveled coal into the boiler. Today the coal room, off the courtyard, is used for building storage. (The boiler, long since replaced, now burns oil.)

In the basement, the southernmost area had a sign over the doorway labeling it the Drying Room, where residents’ staff hung clothes after washing them. Even though automatic dryers (and washers) had been introduced in 1907, they wouldn’t become commonplace until much later. Today storage cages fill the space, so residents can keep the belongings safe and keep them from clogging their homes. Bicycle racks provde a convenient and secure place to keep tire tracks out of residents’ hallways. Both are availble to rent.

A meander tile pattern throughout the building echoes its neo-Classical design.

References to the building have appeared in The New York Times over two centuries. In one, an apartment whose renovation was overseen by Frank Gehry was profiled and photographed in 2011. 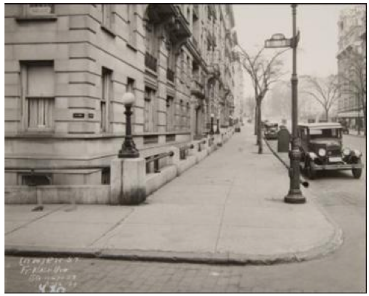 Our southeast corner, looking north, in March 1926. Note the globe lamps and the bricks that pave 180th Street. (Click the photo for more scenes from the Municipal Archives.)

Much earlier, as the neighborhood was being developed in 1909, The Times detailed how The Pinehurst, Chiselhurst and our nearby neighbors were built on land owned by Henry Morgenthau. He was the president of a real estate firm named Fort Washington Syndicate, which wound up its business with the sale of the property on April 21. 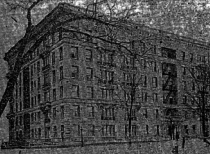 Referring to the area between Broadway and the Hudson, and 177th and 181st, as the Fort Washington District, the paper noted the transformation of “this whole region from a quiet little community of homes into part of the great rapidly growing apartment house district of Washington Heights.” The article includes a grainy photo of The Pinehurst, right.

Later, on October 18, 1921, the paper reported on an accident in Boston, in which a woman whose father lived in “the Pinehurst Apartments” fell out of a window. She survived. 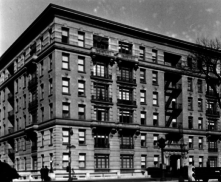 The Pinehurst in the 1940s, when the city photographed residential buildings.

The bay windows in the lobby were filled with stained glass until the 1970s, when they were irreparably damaged. Stained glass also hung in the windows nearest the elevator on each floor until they, too, fell into disrepair.

The building remained a rental property until July 1985, when the landlord sold it to the residents who created the co-operative corporation, an idea first launched in New York by Finns in 1916 in Sunset Park. These days, Pinehurst owners occupy nearly all the apartments and make the decisions about its future. One of them was to re-adopt its original name, the Pinehurst, in 2006 after reviewing historical documents in the New York Public Library.

During the centennial year of The Pinehurst, we asked the renowned British stone carver Simon Verity to add our construction year to the stonework of the building, creating a cornerstone. His carving is duplicated above, with the centennial year added by New York type designer Troy Griggs. 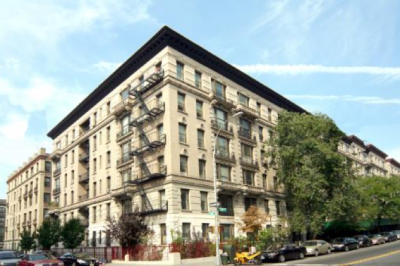