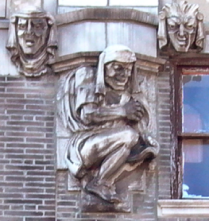 Walk down any street and the mix of languages you hear testifies to the array of nationalities. Look around you and you will see from the building styles that most of the neighborhood was built at the end of the turn of the last century. The architectural details of Hudson Heights apartment buildings hint at the era. Gargoyles, turrets and Gothic-style facades are whimsical reminders of the past, with Art Deco and neo-Classical designs representing styles popular at the time.

It’s one of the best places for recent college graduates to find a place to live, according to Localize.city in 2019, which placed Upper Manhattan at the top of the list of all neighborhoods in New York. Only two other Manhattan areas made the top-ten list: the Upper East Side (No. 6), and Central Harlem (probably referring to Sugar Hill, at No. 9).

All those newcomers have stories to tell. Helpng them share their tales s a twenty-somethng WaHi native, a video producer who reports on Uptown topics to document the neighborhood today. A former vdeographer for NY1, she describes herself as a Dominican-American and she posed for her portrait at the Chittendon Avenue overlook of the George Washington Bridge.

In 2016, The New York Times profiled a neighborhood resident whose enthusiasm for living here centers on friends, family—and a larger apartment than he could find elsewhere in town. In 2014, The Times noted the growth in outstanding restaurants in Hudson Heights, as well as in Inwood and Lower WaHi. Two of them are recommended by editors of the Michelin Guide. It also published a description of affordable apartments in the neighborhood, and included a batch of photo streetscapes that highlight the area.

Three years earlier, The Wall Street Journal noted the neighborhood’s variety of restaurants and The Times wrote up our main street, West 181st, and the uphill climbs bicyclists have on our hills, while The New Yorker took a stroll of Uptown avenues to describe the changes in the neighborhood, both good and bad, since the 1950s. The people who live here come to love living here.

Like nearly every New York neighborhood, Hudson Heights has its claims to fame. One is Vin Scully, who was famous for calling the Dodgers’ games starting when dem bums were still in Brooklyn. He died on August 2, 2022, at his Los Angeles home, aged 94. But before moving out west Scully lived at 869 West 180th Street, which is a block behind our building, between Pinehurst Avenue and Cabrini Boulevard. 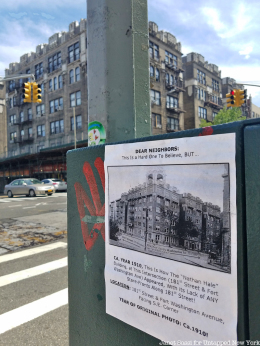 Residents come to find themselves attached to the neighborhood. An Uptown armchair historian spent the summer of 2020 posting vintage photos of streets and buildings in WaHi, Fort George, Hudson Heights, and Inwood — in front of the very same streets and buildings where the photographer had stood a century or more before.

He posted more than a hundred scenes on lamp posts, traffic signal boxes, and other permanent structures. The oldest photos date to about 1905 and the newest were taken after World War II.

The photo here shows the Nathan Hale, an apartment building at the end of the block of Fort Washington opposite the Pinehurst. The historic photo depicts the building with a cupola on top (actually, it’s a belvedere because it has four sides), which was likely removed from its perch decades ago.

That’s not the only architectural flourish to the building. See the gargoyles in the photo at the top of this web page? They reside on the same building.

The caption on the flyer reads: This is how the Nathan Hale building, at the intersection of 181st Street & Fort Washington Ave., appeared, with its lack of any store-fronts along 181st Street. Location: Facing southeast corner.

Read more about the historic photos and the man who put them up in this article.

Restaurants along 181st Street rely on outdoor dining during the pandemic. 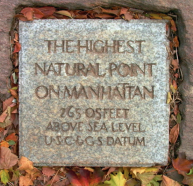 The city goes downhill from here.

As with most New York neighborhoods, the boundaries are inexact. Broadly speaking, Hudson Heights is bounded on the south by the George Washington Bridge and to the north by Fort Tryon Park; to the east by Broadway and by the Hudson River to the west. Along with Fort George and Sherman Creek, it’s one of several smaller neighborhoods within Washington Heights, Manhattan’s biggest neighborhood in area and population. More than 198,400 people live here, according to the 2010 Census, which also showed the population of Hudson Heights had grown by 13 percent since 2000.

Wondering what to do here? The Times created this top-ten list of Upper Manhattan sites. Wondering what the vibe is like? Time Out New York ranked Washington Heights No. 3 in its list of neighborhoods with New York soul. The Times also composed this slide show of the architecture and people.

A 1909 view of The Pinehurst, left, Chiselhurst, center right, and our northernmost neighbor, right, on Fort Washington Avenue. It was published in The Times, which referred to the area as the Fort Washington District.

From Lang Berge to Hudson Heights

Before the Dutch became the first Europeans to settle Manhattan, the Native Americans known locally as the Weckquaesgeek—part of the Lenape tribe—inhabited much of Upper Manhattan and eastern New Jersey. The Weckquaesgeek, and later the Dutch and English colonists, fished and hunted along the banks of the Hudson River.

The area was called Lang Berge (Long Hill) by Dutch settlers until the 18th century, when it become home to Fort Washington and Fort Tryon during the Revolutionary War. As early as 1909 The Times labeled the area the Fort Washington District, and in the years following World War I it was referred to alternatively as Fort Washington and Fort Tryon, both of which had become names of parks. “Fort Tryon” lives on in the Not For Tourists Guide to New York City, the Tryon Towers apartments on Pinehurst Avenue. Until is closed in 2022, the Fort Tryon Jewish Center also borrowed the name.

Starting in the late 1930s, the area was called Frankfurt-on-the-Hudson because of the tight com- munity of German Jews who settled here, including a disproportionate number from Frankfurt-am-Main. Given New Yorkers’ penchant for making clever abbreviations from their neighborhoods’ names, we’re lucky no one thought to shorten the German reference to FrOTH.

Not that name changes have stopped. In the last couple of decades immigrants from the Caribbean moved in; they referred to Washington Heights as El Alto. Newer immi- grants honor the island Hispaniola and call it Quisqueya Heights, which Google Maps cast aside when in the late winter of 2021 it labled part of the area as the Little Dominican Republic.

In late 1992, residents started meeting to create a group dedicated to improving the neighborhood. They discussed several names for the area before settling on the one that you know today, and in 1993 Hudson Heights Owners’ Coalition was formed. (The group disbanded in the late teens.) The name may have been suggested by a line written in 1992 by James Bennet, who published it in an essay in The New York Times: “... a community ... where breezes from the Hudson blow across the rocky heights that helped give the area its name.” 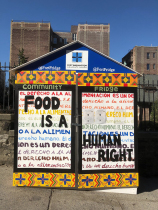 Today Hudson Heights is home to a growing number of artists, professionals and families, and retains its strong flavors from the Dominican Republic and the nations of the Russian Federation. Among the newcomers lured by affordable prices and open space are Jewish families, whose presence here more than doubled between 2002 and 2011, according to a study, and Mexicans, whose population also recently doubled, though over a longer period, 2000 to 2013.

Immigrants have long been important to Upper Manhattan. Hudson Heights is where you’ll find the shrine to America’s first saint, Frances Xavier Cabrini, the patron saint of immigrants. In the church sanctuary, a monumental mosaic was restored in 2015 so that its tiles of  marble Venetian glass and gold-leaf crystal sparkle as they did when installed in 1959.