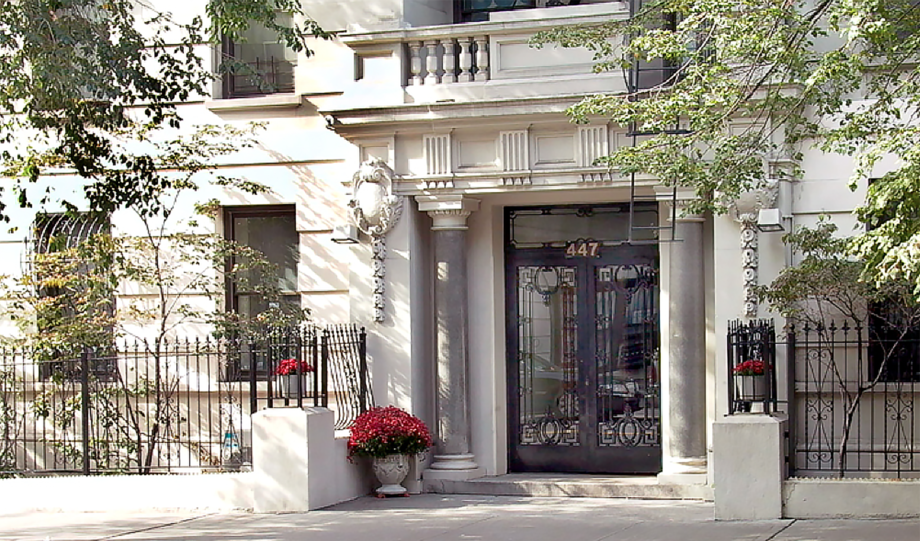 Established as a co-op on April 22, 1985, the building was built in 1907 and opened in 1908 as the Pinehurst. At the time, apartments with western exposures had Hudson River views. But as in the rest of the growing city, new residents needed homes, so new streets were laid and more buildings erected. Today, some of our apartments have views of the George Washington Bridge, a feature that didn’t exist in 1907. 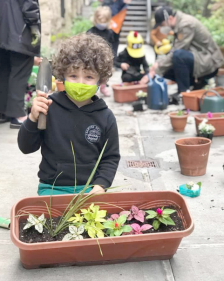 The co-operative corporation serves the interest of apartment owners to ensure the long-term stability of the the building and the business that operates it. The corporation is run by an elected board of directors, which oversees a property manager and a superintendent who lives in the building. Are you interested in serving? Ask a director about the role, and take a look at how these new directors in other buildings found the job.

Ninety percent of the Pinehurst’s apartments are owner-occupied, and all the seats on the board are filled by resident owners.

We’re easy to find: the A Train, which runs express from Midtown, has an entrance at the end of the block, on the downtown end of the 181 Street Station. Take the escalators up, turn right, and head down Fort Washington Avenue. (Note: The escalators are undergoing repair until February. Take the elevators at the uptown end of the station, then when you exits the station, turn left and head down Fort Washington Avenue.)

Are you looking for a new home? See what’s on the market in the Pinehurst.

Events in the Pinehurst 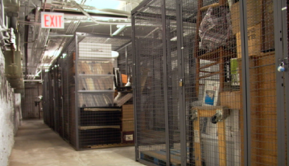 If you can’t fit everything into your closets, put them in one of our storage cages, right. Each contains about 160 cubic feet. To sign up, contact John at Argo.

Whether you ride for fun or for the hills, at the Pinehurst you can keep your bicycle in our storage area instead of your apartment. It’s one of the hot amenities in town. Now that we have expanded the number of bike racks, there’s one available for each apartment. To sign up, contact John at Argo. 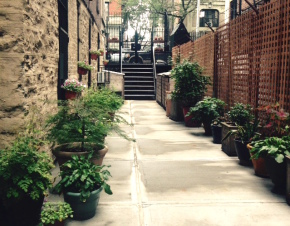 Get a breath of fresh air away from the street in our garden space. The plantings are cared for by resident green thumbs for everyone to enjoy.

All our clothes washers and dryers were replaced in 2009 with new machines that use less elec- tricity, water or natural gas. They also save your quarters because you can pay from your phone with an app instead of with spare change. For the current hours, please see “Laundry Room” on the Residents’ Info page. 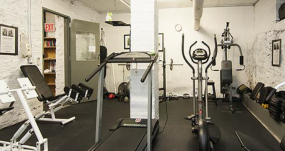 We updated our gym equipment and renovated the space in 2017, right, providing better and newer equipment and a more pleasant workout area.

Our elevator was fully modernized (and beautified) in 2010. New windows were installed in every apartment in 2009, and each comes with screens and tilts in for easy cleaning. We also have an outdoor garden with its own seating area and a live-in superintendent. Find out about the building’s additional updates, below.

The Pinehurst’s Board of Directors is committed not only to maintaining our home but to improving it as it enters its second century. Over the last several years, the shareholders have invested in important projects that keep the building sound and make it more enjoyable.

We made repairs to the building’s exterior in 2022 to comply with Local Law 11. The work was performed by Castcapa and Sullivan Engineering.

One of the most popular amenities in Manhattan is a bike rack—so you don’t have to store your bike in you apartment. We added fifteen racks in 2015, so we now have enough for each apartment.

So that we could comply with new insurance regulations, and to improve the outflow of water on days of heavy rain, in 2013 we replaced the drainpipe that runs under the courtyard. That involved drilling up the old concrete and replacing it, which  has the added benefit of a new, smoother surface in the courtyard.
The work was completed in mid-November 2013 following seven weeks of construction.

Our source of hot water and winter heat reliably keeps us comfortable. But it burned No. 2 oil, which is inefficient, creates a fair amount of smoke and is more expensive than other grades. When the city moved to require all boilers to burn a more energy-conscious oil, we jumped on board.
The upgrade took place in November 2012, and the boiler now burns No. 4 oil, a more efficient fuel.

Our intercoms provide video access to the front door.

To make it easier to identify your visitors, in October 2012 we installed a new intercom system. The staff of Academy, a firm in Queens, performed the work.
The new system provides a video image of your visitor in addition to an audio connection, allowing you to identify him or her before granting access.

Some of the elevator’s machinery we were using in 2010 had been installed around the time Robert Wagner was mayor in the 1950s; some of it was even older than that. Although the equipment was largely reliable, it was temperamental at times. Residents were often left inconvenienced, and when the elevator needed repairs parts often had to be made from scratch because they weren't available anymore.

The Board decided early in 2010 to find an alternative to costly patches. They decided to replace the motor and system that hoists the cab, and to improve the cab’s interior at the same time. Convenience and comfort were two important considerations, and another was the set of new, more strict elevator maintenance rules that went into effect that year. Read about the updated rules here.

The biggest challenge was the two main pieces of equipment, the motor and the controller. The motor runs the elevator up and down and the controller stops it at each floor. These components had survived many years past their expected useful life.

Over seven weeks, the elevator construction company Eltech removed the old system and replaced it with a new one. The job was completed on November 24, 2010, and was done within our financial means and without an assessment. 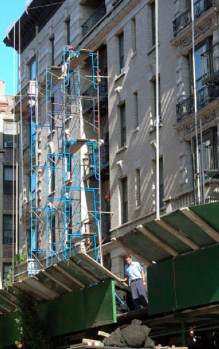 Riggers erect the south scaffold in August 2008 so the south facade can be repaired.

In 2008 we repaired the façade, replacing cracked stone and re-pointing the mortar. The job lasted four months over the summer and fall and should stand for many years. 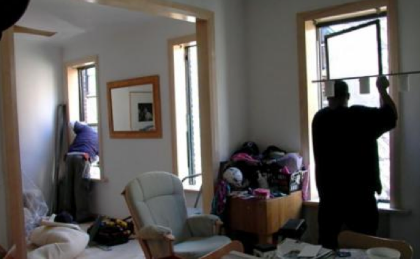 The window installation crew at work in October 2008.

Another big project in 2008 was replacing everyone’s windows, more than 400 in all. The new windows tilt in for easy cleaning and come with screens so we can enjoy pleasant weather without swatting flies.

In 2005 our roof was replaced with a new one, eliminating stray leaks with a new membrane that seals out rain and water. The roof came with a 20-year warranty, so we’re confident we’ll stay dry at least until 2025.

Pigeons pester us as they do most other buildings (and people) in New York. So in the summer of 2009 we hired a pigeon abatement company that strung wire, hung nets, and installed other methods to harmlessly keep pigeons off our façade. 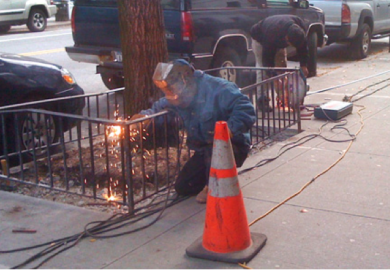 We hired a crew to enlarge the sidewalk opening (right) for our elm tree, and to adjust the fence (left) to fit the new space. (C) RoughAcres
The streets of Hudson Heights host many trees, lending the neighborhood a settled feel. We take great pride in the six trees around the Pinehurst, watering, fertilizing, and, for those in our gardens, pruning them. (The city prunes sidewalk trees.)
In 2009 we enlarged the sidewalk opening around our stately American elm, which is already as tall as the building itself. With a larger opening it will get more rainwater and more space for its roots to breathe oxygen. Want to see our greenery on a tree map? They’re on this depiction created by volunteers; just enter our street address (or any other place in the city).

We also upgraded our laundry machines and laundry room in 2008, added a fitness room in 2007, and installed storage cages in 2006.

We’re committed to improving our building's efficiency with utility consumption. From reducing water usage in showers and sink taps ... 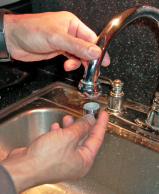 ... to reducing waste in our boiler’s operations, the Board and building staff are dedicated to saving energy, and money, wherever possible.
And don’t forget the information you’re reading now. We launched our website in 2006, just ahead of the co-op’s twenty-fifth anniversary (and the building’s centenary). It’s the source for residents to find out what’s going on in the building—and an array of the rich selection of activities taking place in our corner of New York. The site also reaches beyond our walls when brokers use it to help promote apartment sales.
If you have ideas or suggestions about any aspect of the building, or if you see problems that the Board should address, please let us know.
* * *

A/C installers: Two neighborhood businesses will install or remove your air conditioners for you. Both are licensed to do this kind of work, as the House Rules require. You may hire any licensed professional to do the job, including:
Nuñez Hardware, around the corner on 181st, at (212) 568-0312
Popeye’s Locksmith on 181st, at (917) 370-9792
on the market
History of the Pinehurst